Remember Norman, our puppy, well he got big

Apologies to the Japanese people and our irresponsible trip to Tokyo.

There was a couple of serious incidents this week in town involving Norman, when I say serious you know I mean pathetic.

The first one was when I was passing the fruit and veg shop and a man was choosing a few carrots. See what I mean, serious already. There looked to be a bit of a manky collection in the bottom of the basket but he’d picked out the best ones and look pretty chuffed with his selection. As he learned over to look at the tomatoes his carrot hand protruded out into the street a little, something like this

While walking through town, you may rightly say something like ‘Keep control of your stupid dog’ and you are absolutely correct. But you fail to remember I’m a daydreamer, especially when walking, and I took my eye off the ball, or carrot, for a micro-second. I was probably thinking ‘What can I write in this week’s newsletter, what about that time I got locked in a nightclub and had to break my way out… ‘

(Please note my hair is brown, it was a long time ago)

But then I remembered the email from a lovely subscriber last week who recommended I go to AA after the drunken fight with Chris, so I didn’t want to write about another drinking incident, so what else can I write about…

Then Norman bit the carrots out of the man’s hand and here I am writing about that instead. Thanks Norman, you’re the best.

You don’t know how many times I apologised to the man, I’m going to make a guess at 27. There were no more decent carrots, the tomatoes were naff and the cabbage was … me. He wasn’t happy.

He went home hungry and I walked on to meet Diane at the butcher’s. She had our other dog Lizzi and I was given charge of both when she went inside to buy meat. Lizzi hates Norman’s guts. She told me about a dream she had once, it went something like this

I think there might’ve been a machine gun and a couple of hand grenades involved as well.

Norman is usually not bad at waiting, but the smell of meat wafting out of the butchers was too much for him and he started boinging up and down, we’ve all done it. You know when you see one of those really chunky sausage rolls with caramelized onion or something…

Norman started jumping and Lizzi had just had a haircut. You might think what’s that got to do with the price of caramelized onion sausage rolls… Well, after a haircut Lizzi’s collar doesn’t fit as well as it should, and when she saw Norman boinging, and she couldn’t reach the meat cleaver on the work surface, she thought ‘Stuff this’ and whipped her head out of her collar and legged it down the street.

It was a busy street – cars, lorries, steamrollers that sort of thing.

And I think Lizzi thought, I didn’t really want to do that, but now that I have I’d better style it out. She ran half-heartedly across a side street and Norman went mental, because he likes an event especially involving Lizzi.

You know that old comedy routine where the bloke is walking along trying to pick his hat up but keeps kicking it instead.

That’s what this was like. I wasn’t kicking Lizzi, let’s get that straight, but every time I got close to her, Norman jumped like a maniac and I couldn’t grab her, especially since she had no collar on. So I proceeded along the pavement and across two roads, like this

Norman, a trampolinist, and Lizzi skipping a few feet ahead when I got close. The low point was the very busy cafe, the high point was when I imagined I didn’t have dogs and my life was full of fluffy unicorns instead.

After most of the town had seen me, Diane came out of the butcher’s, saw this ridiculousness going on down the street, said some cute words to Lizzi, like ‘What’s the silly man doing to you, Mrs Fluffykins’ picked her up, then we went home.

Just got time to tell you about the time Lizzi turned invisible.  Me Mam was walking along with Lizzi on the lead and I looked round and this is what I saw: 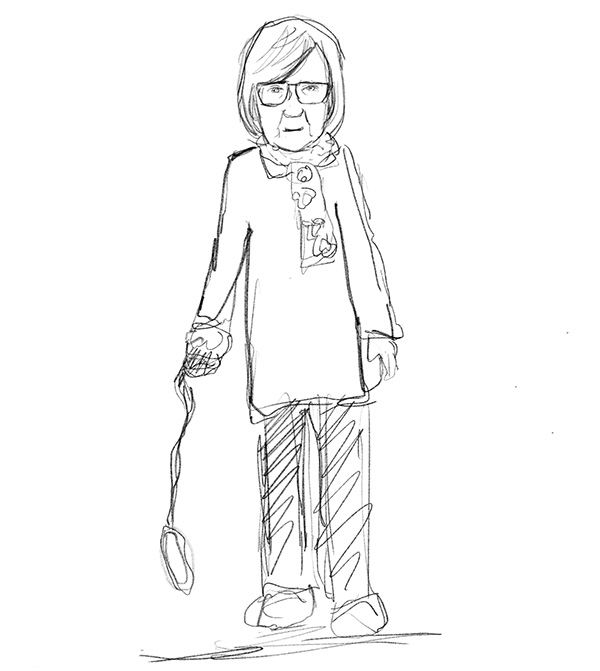 I was just about to call Mulder and Scully when Lizzi came round the corner, ten yards behind. She’d slipped her head out again (yes, we need to tighten that lead up a bit) and my mother hadn’t realized she’d been walking an empty lead. Lizzi is very gentle on the lead, so that’s not as daft as it sounds.

Why couldn’t she have been invisible, now that would’ve been a good newsletter.