Here’s what I’ve been up to this week.

On our way back for The Peak District the other week, we stopped off at Jodrell Bank and it made me feel lonely.

I know, didums. But you will too, when I tell you this simple fact. We are alone. Alone, I tell you. Alone in the vastness of space

There are no intelligent aliens. Here’s the proof.

I’m starting way back. You know those people who begin their stories too early ‘So I got out of bed, I think it was a Wednesday, but it might have, no, no, definitely Wednesday and cleaned my teeth with Colgate…blah’ well I can beat that…

13.7 billion years ago, this happened

3.5 billion years later, using Earth as an example, those cells could’ve easily organized themselves into this pinnacle of intelligence:

That’s a latte I had yesterday at Costa, but we can say it’s the Milky Way Galaxy. The average distance between stars in the Milky Way is 30,000,000,000,000 miles. At current speeds, that would take us 400 years to get to the nearest star.

So 6.5 billion years ago this would’ve been my alien domination plan

Sticking with this simple plan would produce this rapid population explosion.

As you can see I’ve made a right mess of that. Spaceships started smashing into each other and planets colliding after about 2000 years, so maybe I’m not the right person for galactic domination. I was okay for a couple of day trips to Bakewell on the hols, but that was a stretch.

Just to give an idea of timescales. If 10 million years was the same length of time as a series of Love Island (and believe me it feels like it)

(Just to translate, she fancies someone else and he’s thick.)

Then 6.5 billion years would be equivalent to nearly 120 years. This means the galaxy could’ve been colonized 1000s of times before today. Millions, if these advanced civilizations had sent out probes as well.

But it hasn’t. Not a sausage.

So the most logical explanation is – there’s nothing out there that can travel through space or send probes or sausages.

That’s that solved. I will be submitting this paper to the Royal Astronomical Society forthwith.

If you’ve been affected by any of the issues discussed in this email and are suffering from existential anxiety about your place in the universe, don’t worry. It’s all okay. Because there’s another theory, that I forgot to mention.

In that theory, there’s probably been loads of lovely advanced civilization throughout the galaxy over the last 6.5 billion years. Millions maybe. 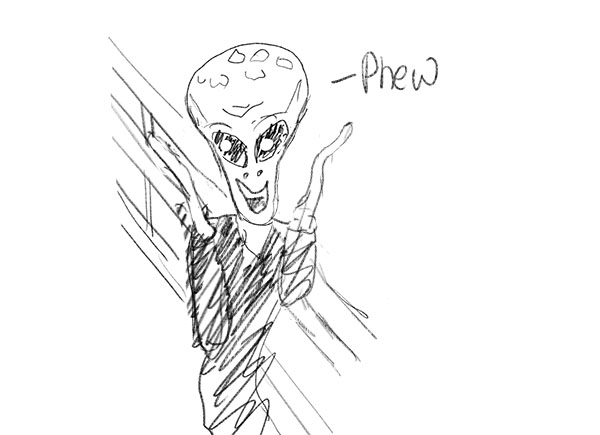 They all destroyed themselves.

Hope that makes you feel better.