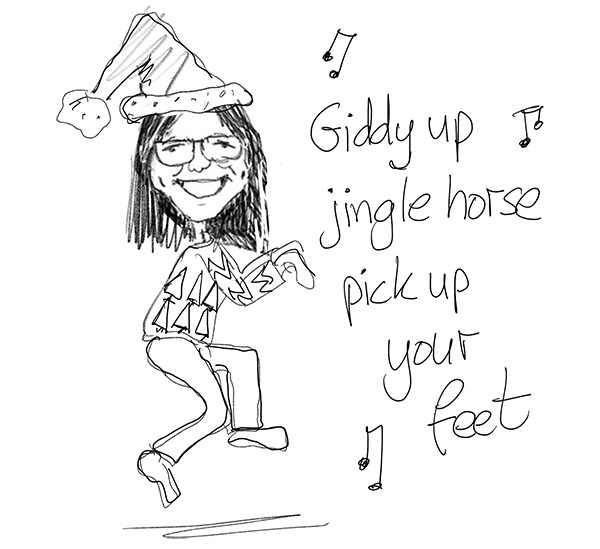 ‘What the hell is a ‘jingle horse?’

After a bit of galloping, guess who was up next on the playlist. 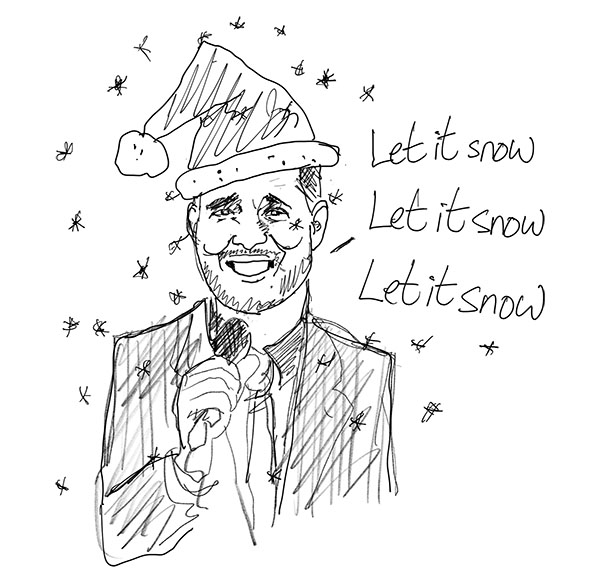 ‘Look Sweetie I think that’s totally irresponsible of The Boob. And dangerous, what with all those power lines going down the other week, leaving loads of people without electricity and stranded for weeks. Totally shameful and I think he should be banned from…’

‘YOU should be ashamed of YOURself,’ was her reply.

‘But in those remote areas, as Chrissie Hynde rightly points out, 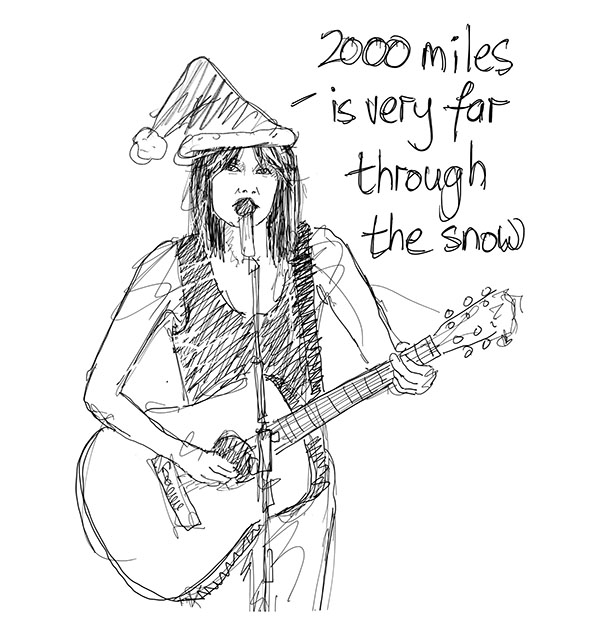 None of this put her off. She just kept dancing, this time it was Roy Wood and his Wizzard buddies. 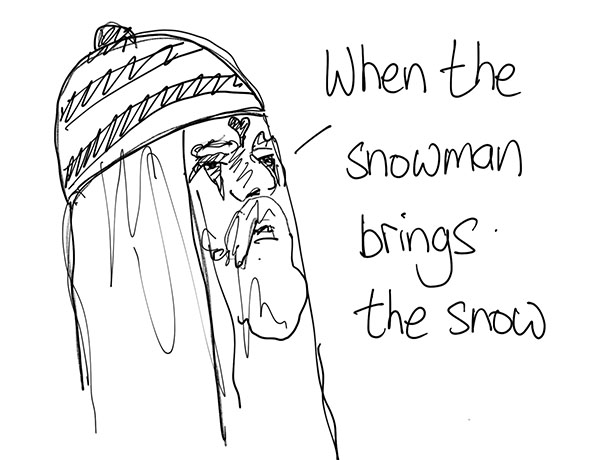 I’m sorry, but I had to butt in again and point out the important philosophical and scientific issues the song brings to light. How can the snowman bring the snow, when he needs the snow to be there in the first place for him to exist. Isn’t this a chicken and egg situation, which asks serious questions about cause and effect and infinite regression and the difficulty in sequencing…

‘Have you been on Wikipedia again?’

‘Just stop it and get a load of this.’

Diane was looking wistfully out of the kitchen window, imagining the Cumbrian drizzle was snow and the overflowing wheelie bin was George coming to get her.

I closed the curtains.

‘So George gave the girl his heart and the very next day she gave his heart away. There are problems here. If the heart is a symbol for love, then the girl has forced George to be in love with someone else who she has chosen by giving his heart/love to them. George doesn’t seem to have any say in who he loves and a serious discussion on the nature of freewell is required.’

‘Poor George,’ she said with a tear in her eye.

Before I could continue the rant, Bing Crosby interrupted me. 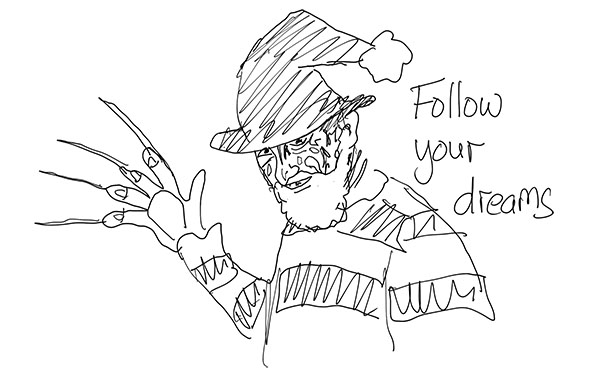 He knows if you’ve been bad or good

I was fighting a losing battle, and to illustrate this Diane started marching up and down with a pretend gun.

Me: ‘That’s a protest song, it was never intended…’ 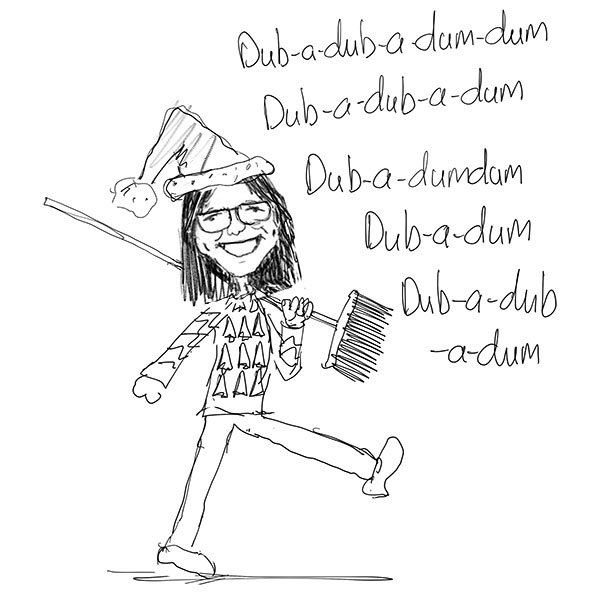 Okay, I’ve had enough. I’m saying nothing about Santa being a homewrecker, going around kissing mommies under the mistletoe. Or a murderer, leaving poor Grandma dying in the snow with incriminating hoof marks on her forehead, because you know why, I’ve had a couple of eggnogs, so stuff it 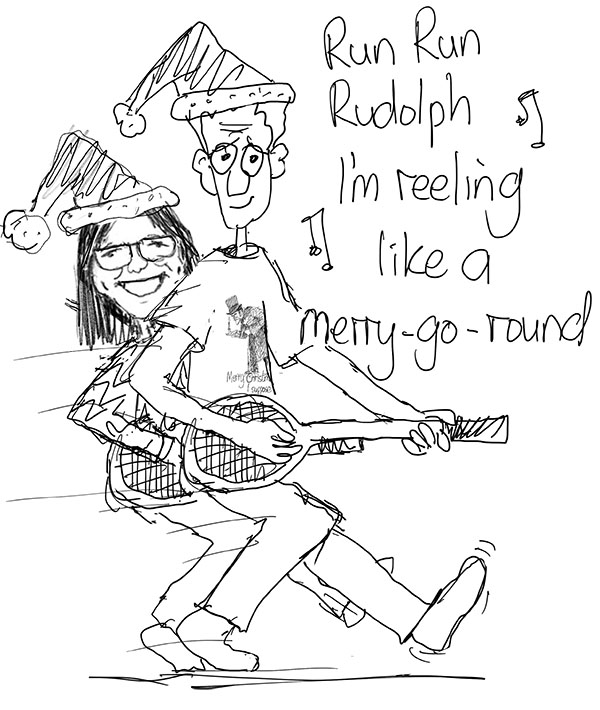 Just one last Christmas song thought. Apart from that Pa rum pum pum pum thing with David Bowie and Bing Crosby, one of the most disturbing Christmas songs must be ‘The Little Boy That Santa Claus Forgot.’

The little boy wrote a note to Santa and all he wanted was some soldiers and a drum, that was it. You can get 100 soldiers for £4.50 on Amazon and a drum for less than a tenner, come on Santa. And you could probably get a better deal with your buying power.

But no, all the little boy got to play with was last year’s broken toys.

And to make things worse, Santa, you just forgot. It wasn’t about the money, you just forgot, for goodness sake. I might forget to put your sherry and mince pie out this year, see how you like that. No carrot for Rudolph either.

But we haven’t even got to the worst bit.

Santa you complete and utter son of a bauble.