Sorry, did it again, that’s the last one, promise. Well, this is my second ever fight, but with this one I was a fully grown adult, so it’s a lot more serious. Be prepared for bloodshed.

I was 20 and on holiday with some friends, let’s call it a ‘lads’ holiday in Ibiza even though that sounds like we just got drunk all the time and made fools of ourselves, so, like I said, I was on a lads holiday in Ibiza and I got into a fight with my mate Chris.

We were in a pub (of course) and there was a bench that we were squeezing into. Chris was in front of me as we shuffled along on our bums. Here’s how I remember it:

I’m not sure if the guy under the bench was dead or alive but he was quiet, so that was fine by us. Chris wiped the sick from the table and shuffled in. I was behind him and must’ve pressed my hand on his as I was shuffling along to sit down next to him.

As you know the hand is a very complicated thing, but there’s a little know nerve in there around about here

I think it’s called the Radial Ulnar I’m-going-to-kick-your-head-in nerve. When compressed with the palm of another person’s hand the nerve sends a signal to your brain which makes you do this

A certain amount of alcohol has to be consumed to trigger it to this level, but nevertheless, be careful out there.

Chris almost knocked the table over and the dead guy groaned a little.

‘OUTSIDE NOW,’ he screamed into my face.

‘I SAID, OUTSIDE NOW’ and he stormed out of the pub. When I say ‘stormed’, it was more like a wobbly light drizzle.

Me and Chris have been friends forever and still are, so I was a bit confused. He did boot our front door in at home once when my brother threw water on him, but that was a minor glitch, well major glitch for his parents who had to pay for it.

Back at the table, we all looked at each other and tried out our ‘what-just-happened’ expressions, which is a very easy expression to master when drunk. Then I finished my San Miguel because nothing is more important than that.

The outburst had put a downer on the evening, and then I got the message from deep inside, one clear, coherent thought shone brightly amongst the blur and jumble of my synapses.

That message usually comes about this time of the night and I’m powerless to resist it. Everyone else around the table said I went out there to find Chris, but I didn’t, I got the call and I was off back to the apartment.

It wasn’t my fault Chris was still waiting outside for me. His Radial Ulnar I’m-going-to-kick-your-head-in nerve hadn’t calmed down, so without messing about he threw a punch at me.

As I said, we were both drunk so everything that happens from here is in slow-mo. You know when people on telly look cool when they do stuff in slow-mo, well that’s exactly how it looked.

I saw Chris’s hand coming my way, so I reached out with slug-like speed and caught it. So Chris went for the left and I caught that one as well.

This is a reconstruction of what it looked like.

Now I’ve seen a lot of Strictly in my time but look at the line of the shoulders there, the classic tilt of the head, and the majestic elbow position relative to the arms.

So we were just standing there awkwardly and so far there has been no damage done to anyone, but that was about to change. Get ready for the serious violence. Look away now if you don’t want to hear about the bloodshed.

Told you it was bad.

You’ll notice that fist doesn’t look like mine or Chris’s, a bit too angular and the arm’s a bit hairy, that is a completely separate fist.

That’s Pete’s fist. He’d realised I’d gone from the pub and raced out to break up the fight. He’s a 6′ 3″, 19 stone rugby player and the act of breaking up the fight caused more damage than the fight itself. I got bundled to the ground by an aggressive elbow and the above ‘dush’ accidentally went into Chris’s lip and blood was shed.

The fight was over. And yet again, I claim a groundless victory. Chris ended up with a burst lip and I didn’t. I won and to make matters worse I lied about no more Rocky references.

Every time me and Chris have a minor disagreement now, the call is always ‘OUTSIDE NOW.’

I just want to mention one other brutal incident that happened to me at football match. I remember it was a very close game, I think it was 2-2 and into the last minute of the game. I admit it was a tense situation but there was no need for this.  My team scored in the last minute and as I was starting my celebration, I immediately got punched in the face.

My brother was a bad loser. 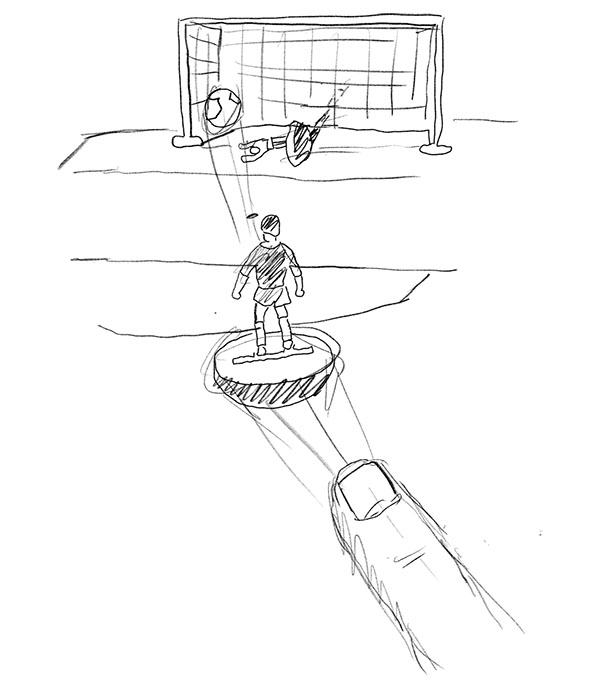 ‘Get in. Pick that out of the back of the net you….’ was as far as I got before the punch came in.