Hope you’re having a good week.

Firstly an apology. I really hope the tension of leaving you with that cliffhanger last week hasn’t kept you awake all week. Very sorry about that.

Here’s a reminder of what we were doing 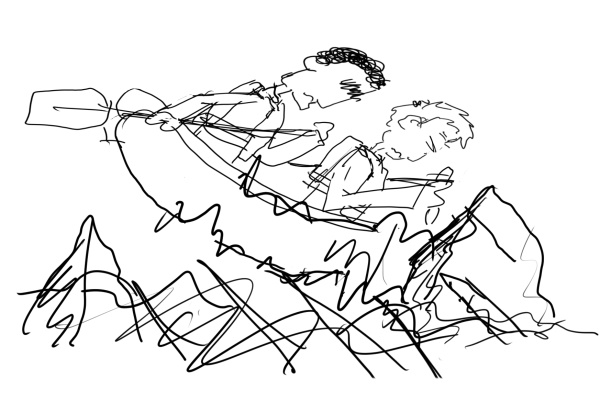 We were in the Morvan National Park in France, and, according to the brochure, flogging your limbs against sharp rocks in a hotdog-like raft is a lot of fun. Over the last 30 minutes, we’d learned a lot about ourselves, we’d dug deep both mentally and physically and discovered to our absolute amazement, we were crap. All that studying I’d done over the years had paid off. 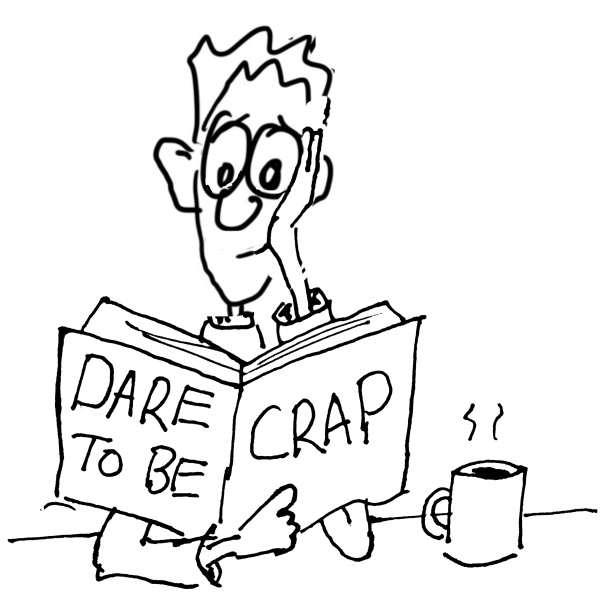 Once fatigue set in, and the inevitability of serious injury dawned upon us, something happened. We relaxed and started to glide a bit more. Being dragged along by the strongest currents, we were able to pass the hardest of the boulders, only nudging a few soft fluffy ones here and there. The paddles, we used for steering only. We were the weak link, the water knew what it was doing, it didn’t need a couple of idiots hacking at it.

Perhaps the brochure had been right after all.

‘Exhilarating’ – it had said.

With newfound mastery, we meandered through the white water, sliding down cascades and twisting through rock chicanes, a human hotdog hybrid following the racing line faultlessly. 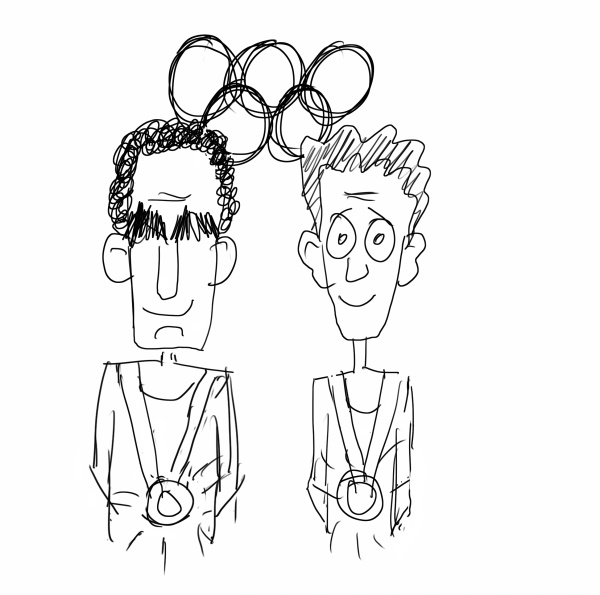 I’d forgotten in the last few sketches that I had light brown hair back then, so that’s what I really looked like.

Back to the river, things were going well. But we had to go and do it, didn’t we, we just had to. That fatal flaw of every young Englishman: excessive self-satisfaction without any cause to be.

We heard ourselves shout to the boat in front: ‘Hey, look, no paddles,’ and we slapped our oars together above our heads in a paddle high five. 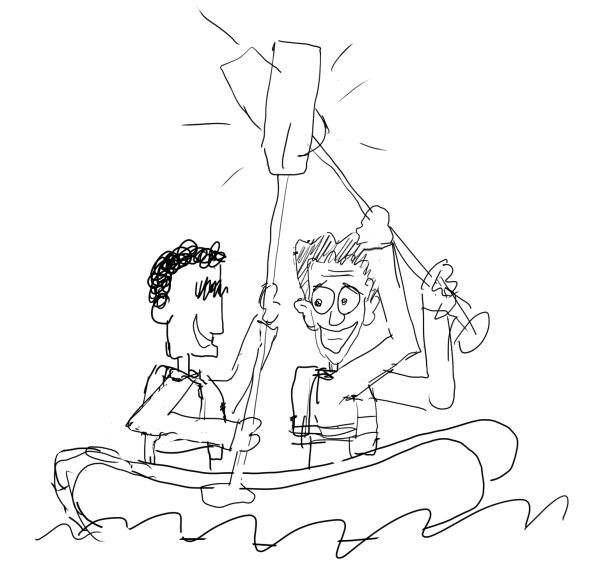 ‘Be careful, we’re here, Dead Man’s Fall….’ The instructor was pointing down to where the water ended abruptly, replaced by sky.

‘Stay right, like I told you. You understand. STAY ON THE RIGHT.’

Their raft slid casually to the right.

The current swept our stupid hotdog sharply left and accelerated us down a few small drops. We tried to compensate by thrashing around and screaming until we realised we were going backwards. A huge rock in the shape of a gargoyle gave us a contented smile on our way passed as we were swept over the edge. 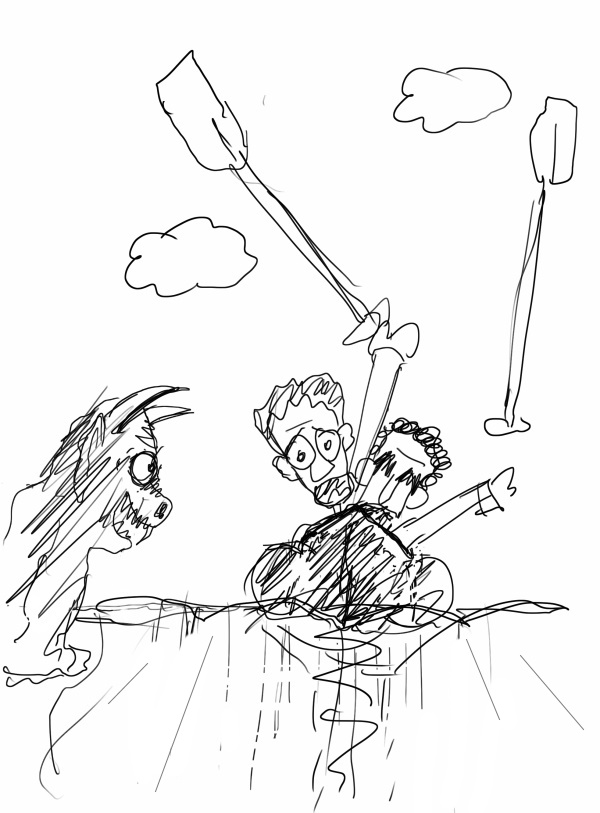 The last time I had been airborne with an hotdog was an Airtours package deal to Zante. I enjoyed it even less this time.

‘Uplifting, you will soar’ – the brochure said and we did.

With my eyes closed, I mentally thumbed through the list of people I would miss back home, and hoped for a lovely grave with a nice view. 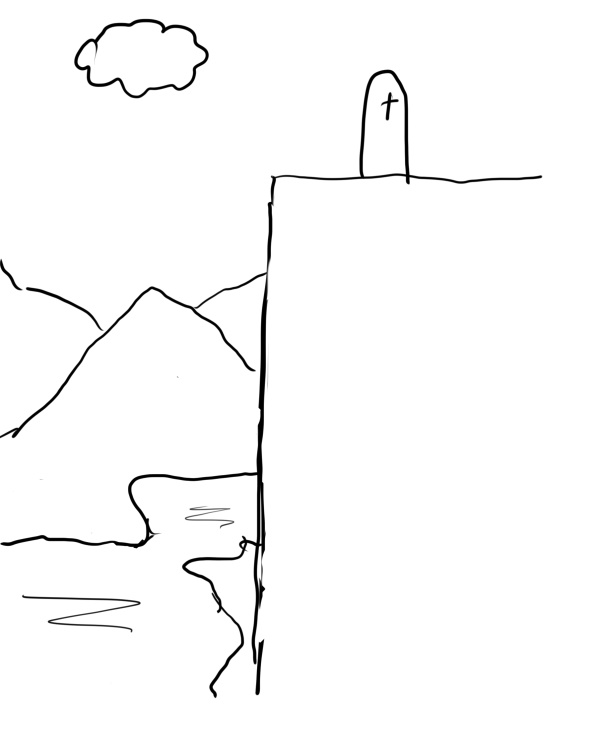 But I didn’t need it. Something happened. I have told people through the years it was a natural balance and poise, a skill that you just can’t learn, you have to be born with. It was courage and teamwork and the ability to contend with…

Thanks for intervening there.

The noise of the water hid our baby-like screams. But for some reason, we hit the water perfectly, bobbed back up through the spray, the river handbraked the vessel the right way round and slid us into the bay where the instructors and other paddlers were waiting.

There was a cheer. I blinked back my farewell tears, checked for limbs I remembered, and disembarked to a hero’s reception.

‘What? You’ve never done that backwards with a triple salchow?’ I said casually.

‘Deeply satisfying.’ Yep, the author of that brochure knew his stuff.

To my knowledge, that section of the river is now called Smug Englishmen’s Fall, or maybe I lost something in the French translation. 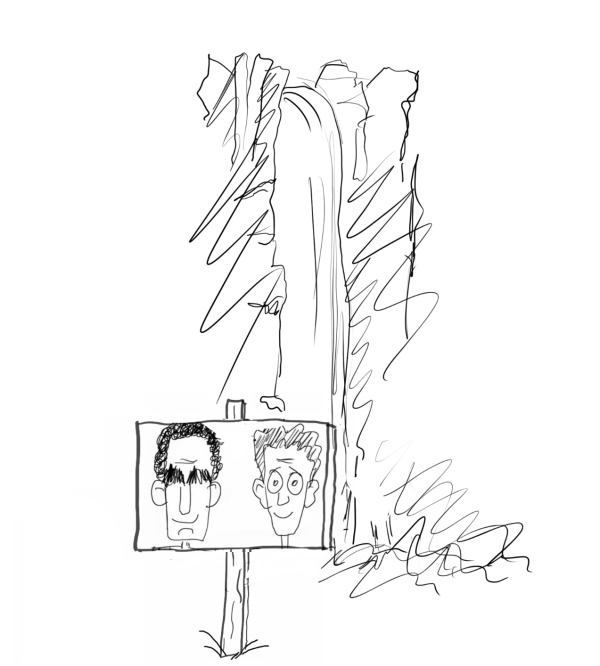 Thanks, you made it to the end. Hope it was worth it???

This week, you will have noticed there have been a few sunny days. And this must’ve gone right to my head, because look what I found myself sketching during ‘Say Yes to the Dress’, or whatever else was coming out of the telly.

Don’t know what came over me with the palm trees. Then I became obsessed with dogs and drew all these.

There’s a few more on the new Dogs Section of the website.

Thought I’d also draw the guy with one of the best names in showbiz, Evel Knievel. Here he is, flying. And I think he’s actually going to land this one.

I’m a Green day fan, I know, a bit modern for me, but they have some great songs. The lyric here was suggested by Jeff Thomas, it’s from Jesus of Suburbia, so I thought it was perfect. Thanks Jeff.

I did this one ages ago and haven’t sold that many, because it’s a bit daft, but thanks to the people who did buy it.

So I racked my brains, to try and think what I could do, so I came up with this radical solution.

If I could just be smug for one last time, sorry. I’ll just tell you about my fellow adventurer, who we can call Pete, because that’s his name. Here we are again, twenty years ago. 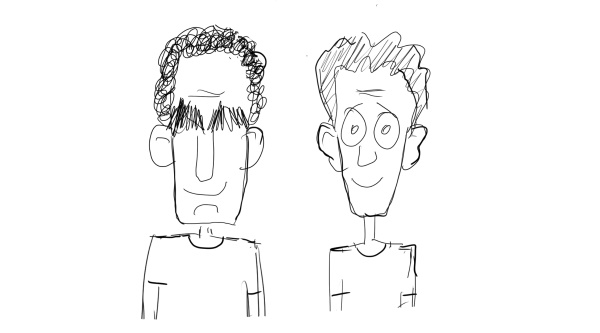 Well, he used to cruelly take the wee wee out of me because my dad was bald and my grandad went bald when he was 21, so I obviously didn’t stand a chance of holding onto any follicles. 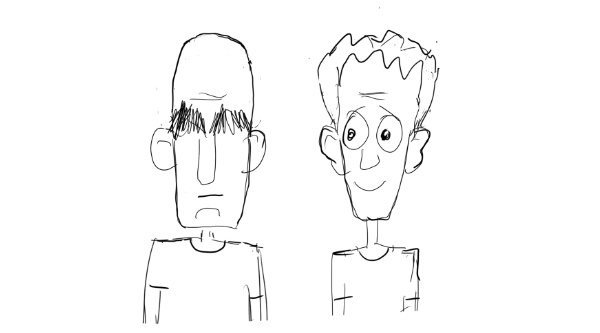 Have a smug weekend.