Have you ever done this for 90 minutes before?

I have, and it wasn’t after that 2-0 home defeat by Everton last year. I was at the dentists getting my wisdom teeth out. It was an interesting experience. My top teeth aren’t too bad but my bottom teeth are starting to look a lot like this

‘You’re losing a bit of bone density in your jaw just above the mylohyoidin line,’ said the dentist.
‘Wasn’t that on the telly in the seventies,’ I quipped hilariously.

With a gob full of fingers it came out as ‘as at on e elly in e evenies’ which is obviously why she didn’t split her sides with laughter.
‘That’s what’s holding your molars in place,’ she said.
‘Oay, o a’ll….’ let’s assume from now on she’s removed her fingers, ‘Okay, so I’ll drink more milk and eat more cheese,’ I said, ‘bit of extra calcium will have that sorted.’
‘Nope, it’s not getting better. In 10 years your teeth will start tumbling out because they’re hanging by a thread as it is.’ Here’s the actual x-ray to prove it.

This was the first time someone had told me things weren’t going to get better. The good news is, it’s hereditary so I had someone to blame. I went straight round to my mam’s house looking for answers.

I have a key, so there was absolutely no need for that.

Here’s the interrogation in full:
‘Mam, when did you start losing your teeth?’
‘Can’t really remember.’
‘When did you need falsies?’
‘Don’t know really.’
‘Did they fall out or did you have them pulled out.’
‘Not sure, to be honest.’
With all my questions answered, I repaired the door and left.

So here I am getting my wisdom teeth removed. And for things hanging on by a thread, they took some getting out. Apparently, they were impacted and had to be cut in half first before being yanked out.

The dentist and the nurse were having a great crack, and you know out of politeness, and to be part of the gang, you have to nod your head and smile a little when something amusing is said, this is the face I pulled when required:

The strain of that almost split my cheeks clean in two.

If you put that into Google Translate, Dental to English it’s ‘Get on with it then.’

They ripped and sucked out a few more things, discussed what’s for dinner tonight in great detail, the carrots in Lidl aren’t what they used to be, and then they were done. Wisdom teeth extracted.

It took a while for the anesthetic to wear off.

And when it did, I didn’t make a fuss, not at all, I took that excruciating pain like a real man, stoic and brave.

Happy ending though: I wasn’t paralysed down my right side. I’m not sure if that was dentist humour, if so

As you can see I’ve fully recovered.

I’m going to the Michael Schenker concert in Newcastle tonight, so if you see me come and say hi. After a few pre-concert drinks, okay drinking all afternoon in the Newcastle pubs, I will be looking something like this 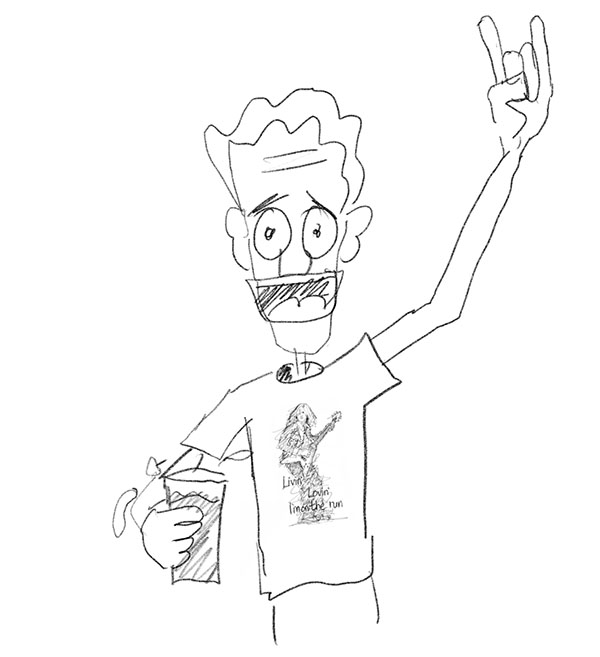 If I respond to any of your emails after about 4ish, ignore them, I’m drunk.