I have a Norman update this week and a precautionary tale for anyone thinking about getting a puppy when they see cute photos on the internet.

He doesn’t look like that now, here he is

Before you read on, he’s free to a good home, we’ll even pay postage and packing.
(Diane made me clarify that that’s a joke(email me later))

This is basically a list of questionable behaviours from last month. There’s GBH, theft, disgustingness and a suicide attempt.

Let’s start with grievous bodily harm. He head-butted a Grandma.
A Grandma approaches in the street, her, as yet un-butted, face smiling at Norman.
‘You’re a handsome fella, aren’t you?’ she said.

Grandma bends down to stroke him.
‘He’s a bit jumpy so be careful,’ I warned.
‘I’ve had dogs all my life, son, I know what…’

There were no false teeth, I just fancied drawing them, but he did burst her lip. Very very sorry Grandma.

Let’s move on. There were some teenagers walking along making an absolute teenage racket, swearing and throwing litter.

When one of them threw the bottle in the field, my hate monitor went to 11. I’m not confrontational but I did a bad thing. Usually, when I see people approaching, I put Norman back on his lead for their safety. This time I didn’t. Norman piled in with his disarming and likable waggy tail.

How was I to know one of them had just bought a full packet of sausage rolls for his tea from Gregg’s? Norman spotted them dangling from a teenage hand.

He wolfed (never has that word been used more correctly) them down.

I apologised but I didn’t mean it.

Next one, I’m at the train station. I was waiting outside for my daughter. I took Norman as part of his continuing, some would say failing, training regime in order for him to experience all different environments.

I couldn’t see my daughter so I thought I’d just nip inside to see if the train was delayed. There was a screen just near the door and it would take 2 seconds. Norman looked casual. I dragged him in, the train was just approaching, brill, so I whizzed back out.

In the (busy) train station doorway, the lead tensed and Norman assumed the poo position. I pulled him, but when I looked back he’d turned into Magnus Magnusson.

If Norman was on Mastermind, his specialist subject would be huge poos in doorways from February 2022 until I started crying.

Like I said, I pulled him through the door, but that spread it out nicely over 10 feet and when the automatic door closed behind me, it closed with a squelched. Through the glass door, a man was on his phone and wasn’t looking where he was walking…

I can’t write anymore because it’s giving me palpitations.

After that incident, it must’ve been the shame of it, Norman tried to commit suicide.

We were walking beside a river after the storms, so it was deep and fast flowing. Norman usually dips his toes in and has a splash about in the shallows. But this time he threw himself off the bank and into the water about 4 feet below and the current launched him down the river.

I was running along the bank, shouting ‘This way, swim this way.’ Norman only knows a few words ‘No’, ‘Seriously, NO’ and ‘You idiot’ so ‘Swim this way’ was a lesson we hadn’t got to yet. After 50 yards, I was thinking, am I really going to have to jump in here?  I was also thinking about how I was going to kill him once I’d rescued him.

After what seemed like the length of The Nile, but was probably 75 yards, Norman accidentally paddle closer to the bank, I slid down and grabbed his stupid collar. Apologies to his collar, because his collar is a lot more intelligent than he is.

That’s the 4th collar to resign.

I haven’t got time to tell you about the paint tin in the garden, or the silly grass or incident in the Post Office, you’ll be glad to know. Norman’s training is ongoing, that’s how we’ll leave it for now.

Norman says, as part of my training, I need to look more carefully at things. If not, whatever happens is my fault. Here’s an example of me looking across the local park 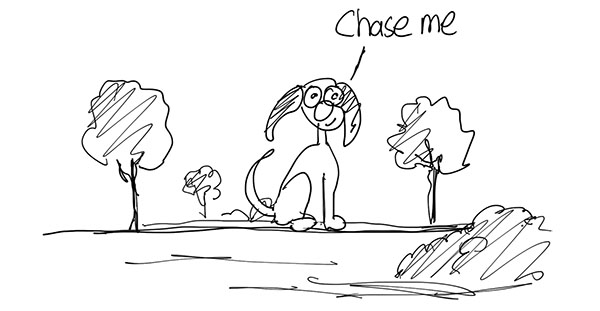 And then we have a little run.