I must warn you there’s violence, injury detail and nudity. But (no pun intended) before you get excited, the nudity isn’t the kind you might see on Bridgerton, with beautiful people wearing tops hats and birthday suits.

It’s me, so switch to Netflix immediately is my advice.

My stag night was before lads went to the Seychelles for a week to drink and be sick. We got a minibus to Keswick, 20 miles down the road. That was far-flung enough for us. It had tourists and expensive drinks.

Sorry exotic people from the south for that stereotyping, and you’re right we do whack each other with black puddings up here.

However, we didn’t pay for those southern priced drinks. I had a friend, who will remain anonymous, who worked for the brewery and could get us free drink, win win.

We’re still friends now despite the fact he’s a bit tight with the free drink nowadays, which means we’re actually friends and I wasn’t just using him for the freebies.

So we drank all night in Keswick and managed to get back on the minibus. There was a trend back then on the West Coast of Cumbria, I don’t know if it was a thing elsewhere or is still a thing now, but Stags got their clothes taken off by their ‘friends’ ‘for a laugh.’

I was a tiny bit drunk, free drink does that to me, and we were halfway between Keswick and Workington. If you don’t know that particular section of road, let me try and give you a flavour of what it’s like.

Here’s the next few miles after that.

It was at that moment that my ‘friends’ remembered the West Coast tradition. It was 12 onto 1, so my clothing was removed in a way that cannot be described as caring, but was very thorough, and then I was shoved off the bus. There was one positive, my best man, Pete, also got booted off (still fully attired).

So here we are.

A dark road on a dark night, 10 miles from home, completely naked.

An indeterminate amount of time went by. Einstein said, and I think this is almost word for word, that time is indeterminate when you’re naked at 1 in the morning by the side of the road. And he was right.

At some point, I did this.

And, I know this is difficult to believe, but someone stopped. It was a big tough-looking lorry driver, who must’ve liked what he saw. Yak, that didn’t even feel good writing it.

We climbed in and he drove us to Workington.

That should be the end of the story but unfortunately not.

We pulled into the town centre. I was flopping around in the front of the cab when the lorry driver slammed on the brakes at a roundabout. Any officers out there, I was definitely wearing a seatbelt, so I was as confused as you when my head smashed into the windscreen.

Blood started pouring out of my head onto the dashboard and I looked up and a crack was cracking its way along the whole of the windscreen.

And someone was a grumpy gills about it.

So we got booted out of a second vehicle, but this time with blood pouring out of my head. And now we were in the centre of town, with the pubs getting out.

Which was a lot worse for Pete, because he was the one chasing a naked man through the streets.

There was one bit of luck, my house was close to the centre of town. The details of the run are lost to me, there was a bit of shouting and screaming, but that was mostly me, and eventually I turned into my street and Pete carried on running.

I don’t know whether you’ve ever been in this situation before, but when something dawns on a drunken brain it takes time to settle in, for the synapses to align, and a thought to form with any sort of clarity.

My run slowed into a jog and then a walk and then I stopped and the thought made its appearance.

I walked to my front door in the hope that I’d left it open. But no, damn my obsession with locking my front door when I leave the house. I rattled the door several times just in case the mechanism would fall miraculously into place.

However, if you read this email regularly you’ll know I have a guardian angel who saves me when I’m in trouble. Well, she did it again.

The hall light went on, the lock clicked and there she was.

My guardian angel had predicted something might go wrong on the stag night, not sure why, distinct lack of faith, so she’d decided to stay the night just in case.

And there I was locked out, totally naked with blood pouring out of my head, not sure what she was worried about.

Diane still married me, I’m glad to say. It was a few weeks later and my wounds had healed and I’d put some clothes on. And because I’ve reminded her of that night, to get back in the good books, I thought I’d do a lovely sketch of us on our wedding day, that she can put up above the mantelpeice. 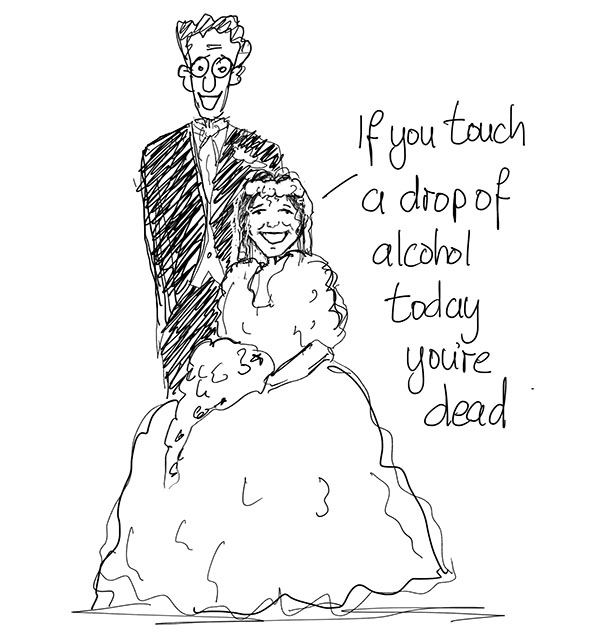 Hope she likes it.