Once upon a time I worked at the local factory, and I had the pleasure of working with Bezel, a genuine psychic.

That’s Bezel standing in front of a strange straggly looking bush.  Bezel was a fitter but could predict when a component on a machine was going to pack in, all he had to do was dream about it the night before.

Don’t worry, Bezel didn’t mind me sitting in the corner of his room watching and sketching him in the dark while he slept.

I’m not sure you know this, and I didn’t until I saw Bezel at work, but psychics don’t have wobbly lines coming out of their brains. I moved the spider plant on his bedside table to prove it, look:

The psychic-ness all started when he had a very specific dream. He dreamt the safety bolt on the schnoodle valve had failed, causing the whatsit machine to leak dangerous levels of hydrogen thingamybob. Sorry for the technical jargon there.

Bezel got into work that day and as soon as he walked through the door Lumpet, the foreman, said to him.

‘What a night we had, the safety bolt on the schnoodle valve failed, causing the whatsit machine to leak dangerous levels of hydrogen thingamybob.’

Bezel does have lines coming out of his head when he’s freaking out.

And that was the moment – Bezel’s first psychic prediction.

But it’s better than that. He occasionally had similar dreams about different parts of the factory, and whenever he did he was always 100% correct.

No matter what we said, he always refused to go and get tested by scientists, because he didn’t like probes inserted where he didn’t want them inserted. (Side note from me: I agree.) And he couldn’t take the pressure of solving all the world’s problems before they happened.

So the world remained a complete mess and yet again the spooky realms of the unexplained remained unexplained.

Spoiler alert: No, they didn’t. Because everyone at the factory knew the truth.

You see, every morning before work, Bezel collected his paper from the local newsagents and had a crack with Nobble behind the counter.

Just another aside. No one is known by their real names where I live and some have several names. It was a confusing time when I first started that job, e.g.
‘Email Wiggles about that.’
‘Who?’
‘You were talking to him yesterday, you know, Fathead.’
‘So it’s fathead@…’
‘What? No, what’s wrong with you, it’s The Cruncher, for god’s sake’
”Eh?’
Turns out it was Brian Jones from accounts.

Brian did have a wig, a fathead and crunch numbers, so they were all reasonable.

Sorry, back to Bezel. On the morning of the schnoodle valve failure. Bezel collected his paper and told Nobble about the strange and detailed dream, picked up a couple of mars bars and left.

That’s a pelican crossing light flashing behind him.

It’s a small town, and Nobble knew Lumpet and he immediately texted him this message:

‘When Bezel comes in tell him the safety bolt on the schnoodle valve failed last night, causing the whatsit machine to leak dangerous levels of hydrogen thingamybob. See what happens.’

One more time and I think I have the world record for typing ‘the safety bolt on the schnoodle valve had failed, causing the whatsit machine to leak dangerous levels of hydrogen thingamybob.’

Lumpet did tell him that the safety bolt on the schnoodle… okay I have the record, no need… and Bezel became a psychic.

Whenever Nobble heard about another dream, a text was sent to Lumpet and Bezel became a legend.

All this is true, except Nobble didn’t have a phone and there is no newsagent on Bezel’s way to work…

Just enough time to tell you another incident with Lumpet that caused a guy called Spanner or was it Screwdriver, I don’t know, anyway it caused him to do this. 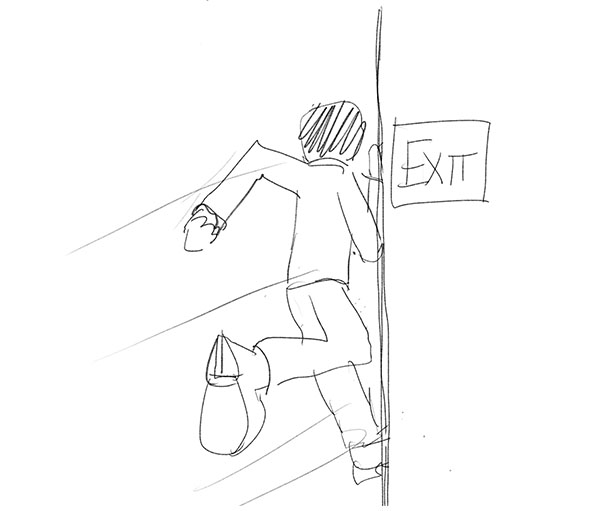 In the factory, lunchtimes were sacred and if you interrupted Lumpet during his corned beef sarnie and 55-minute deep analysis of the Racing Post, or bothered him in the pre-lunch 15-minute wind-down, you would be severely tongue-lashed.

His devotion to this ritual was clearly demonstrated when he finished one successfully uninterrupted lunch, walked back into the workshop and told Spanner that his wife had called just before lunch, must’ve been during his 15-minute wind-down, and she was on her way to hospital to give birth.

That’s how to stick to your principles.

Have a great weekend. I had a word with Bezel and he predicted that would be true.