This week I discovered, with your help, that time travel is possible.

I’m serious, it’s got nothing to do with Doctor Who and that was just a pathetic attempt to advertise a t-shirt.

Yesterday I stood on the bridge leading up to Carlisle Castle at 4.15 pm (time demonstrated by Diane’s lovely arm) and waited. 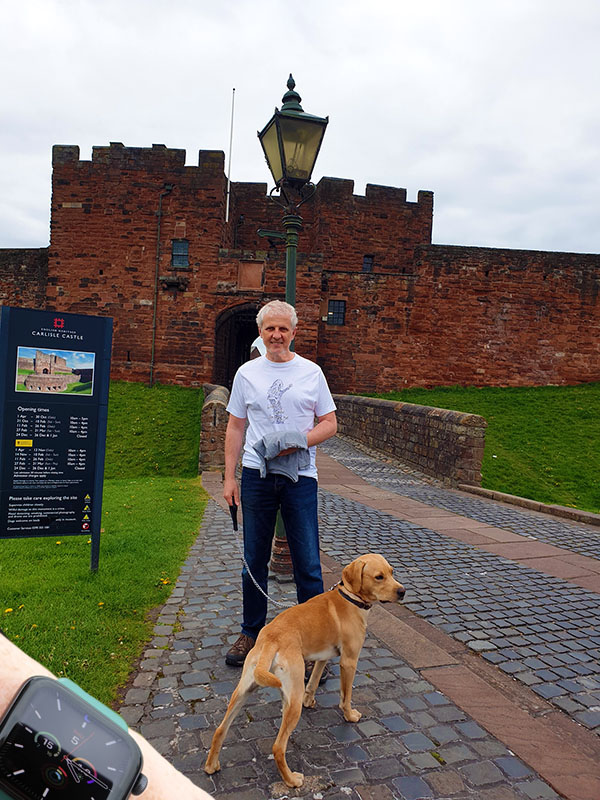 I was excited, in fact I was a bit nervous, but I had my free t-shirt to give away and as you can see Norman was there, and he’s spotted something across the road.

Diane: ‘What are we doing here, exactly?’

Me: ‘We’re meeting someone. Just wait, and remember all great scientists are ridiculed at the beginning, so keep the faith. We’re turning science fiction into science fact.’

This is where you come in.

Here’s the invite to the meeting that took place yesterday. This is the first time it’s been sent out. Now, I don’t even have to ask because I know already, so thank you for sharing the following with all your friends. 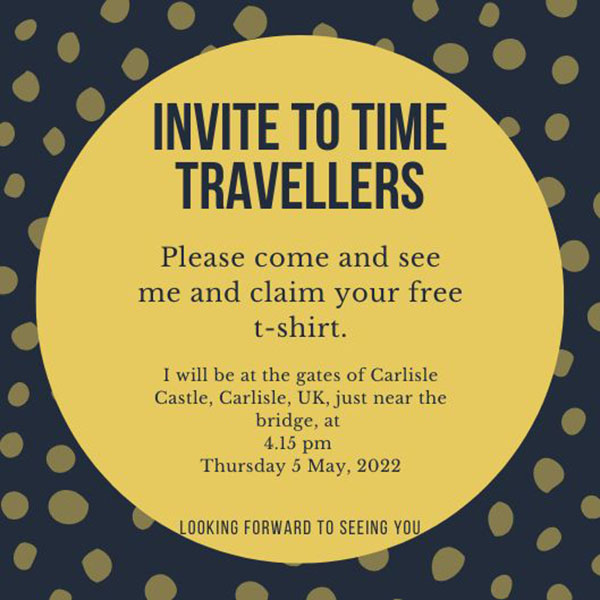 So I’m sending out the invites today to as many people as possible for a meet-up yesterday. This means no one knew about it then, so whoever turns up is from the future and has travelled back through time.

I can’t tell you how excited I was. I didn’t know what to expect but I hoped it wouldn’t be Captain Kirk, especially after Star Trek 4
‘Spock… sling…shot….us around the….. sun, one second… while… I snog… an alien.’ 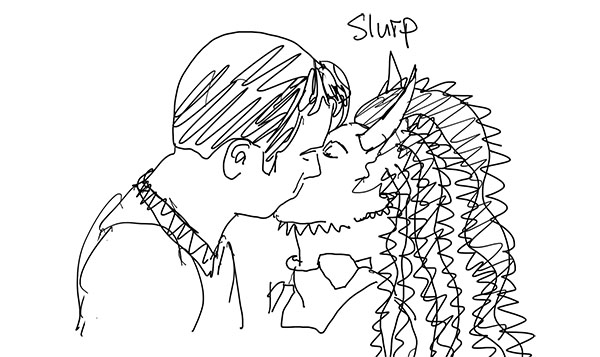 How is Spock supposed to concentrate on his dilithium crystal calculation with all that racket going on? Stay focussed for god’s sake, Teacake*.

(*Me and my brother used to always call James T Kirk, Teacake, not sure if that was a general thing or was that just us.)

But this isn’t telly, this is real science. Back to Carlisle Castle.

4.13 pm I couldn’t see a wormhole forming just yet.

But Norman started barking weirdly. I’ve trained him to detect wormholes while playing on the grass in the garden.
4.15pm Still nothing and Norman had calmed down. I felt a bit of an idiot but it was worth a try. No one knew I was here and I could write the newsletter about the time I ate dog poo as a child instead, so that was all good.
4.17am We started walking off, but then I saw him, just across the road, walking towards me. He was walking slowly and a little bit unsteadily.

Time travel is disorientating, and by the look of his clothes he’d come from the far future where fashion and cleanliness didn’t matter anymore. 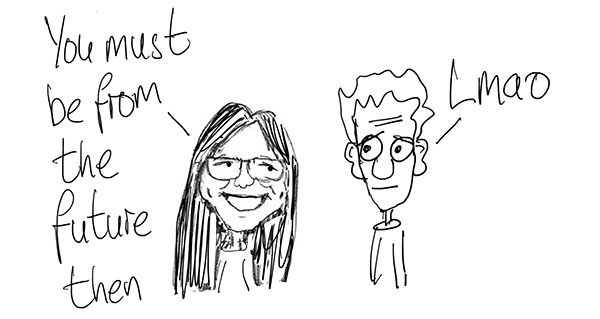 I walked towards him.
He spoke first: ‘Hey, are you…’ he seemed a bit confused, but that makes total sense.
‘Yes, I’m Ian.’
‘Is this…’ Look Bruce Willis in 12 Monkeys didn’t know where he was when he first dematerialized. 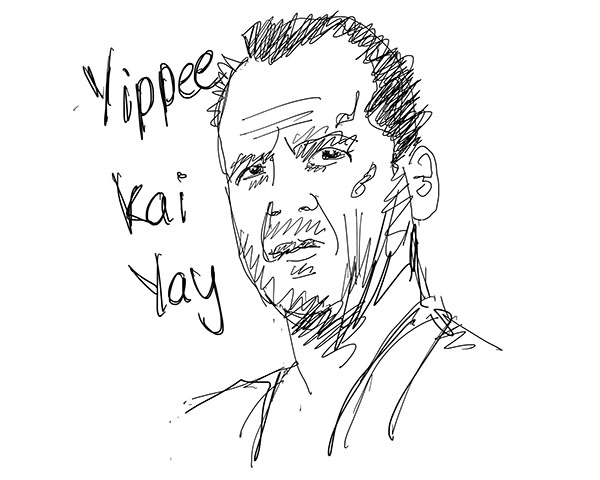 See what I mean.
‘Is this…’, he repeated, still confused.
‘Yes, it’s 2022, which year are you from?’
‘Wha…what?’
‘Where have you come from?’ I asked.
‘Weather…’
‘Weather? What we’ve polluted the environment and storms have killed humanity?’
‘…spoons.’
‘What? No.’ I dropped to my knees. ‘Plastic spoons have clogged up the ecosystem causing catastrophic temperature fluctuations?’
‘…steaming…’
‘The atmosphere has been burnt away and the oceans are steaming?’
‘… totally wrecked…’
‘The world? Oh, my god, when does this happen?’
Then a white van pulled up, the side door slid open and he staggered backwards as if pulled by a tractor beam.

‘Get in Wazzokyernumpty,’ shouted the disheveled-looking scientist from the driver’s seat.
‘Wait Wazzokyernumpty,’ I shouted, ‘I’ve got so many questions…’
The door slammed and the van tore off down Castle Way. There’s no doubt it reached 88 mph before the roundabout and it disappeared…

What do you make of that? I know, hard to believe, but nevertheless undeniable proof of time travel and a sober warning. Whether spoons are involved in the downfall of humanity, I’ll leave that up to you, but it seems clear to me.

Diane managed to get this photo. 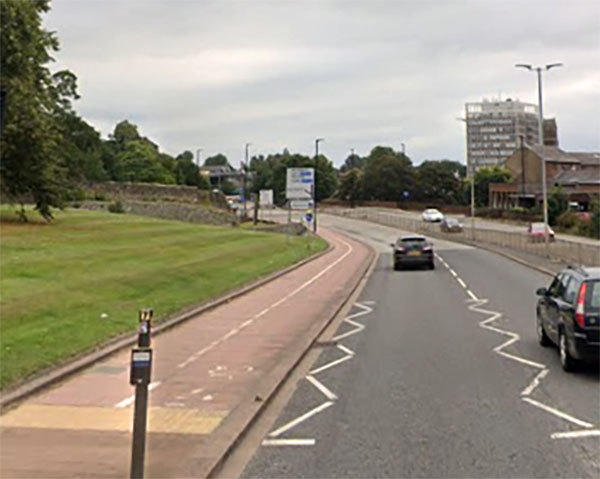 But as you can plainly see, due to the time-dilation effects on the gravitational potential of the relativistic velocity, the van had already gone. Plops.

If you have any questions about this, I’ll be too busy with Brian Cox for the next 6 months. 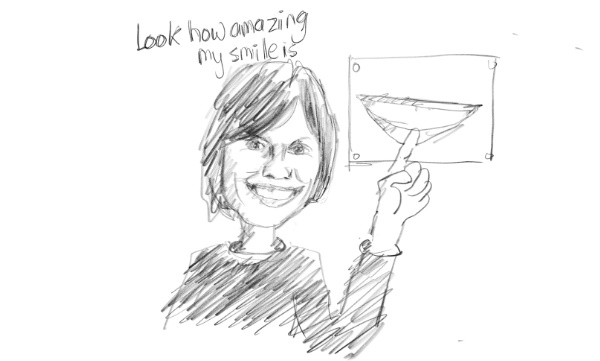 Look, I know Wazzokyernumpty has given us a serious warning but we should’ve been ready, we’ve already been warned, lots of times.

Terminator, a dystopian world ruled by out-of-control robots, was set in 2029, very close. Blade Runner, also dystopian with rain and sentient bio-engineered humanoids from Mars, was 2019. Space 1999, not sure when that was set, but humans live on a not very dystopian but I like the word dystopian, can you tell, moon and are blasted into space. 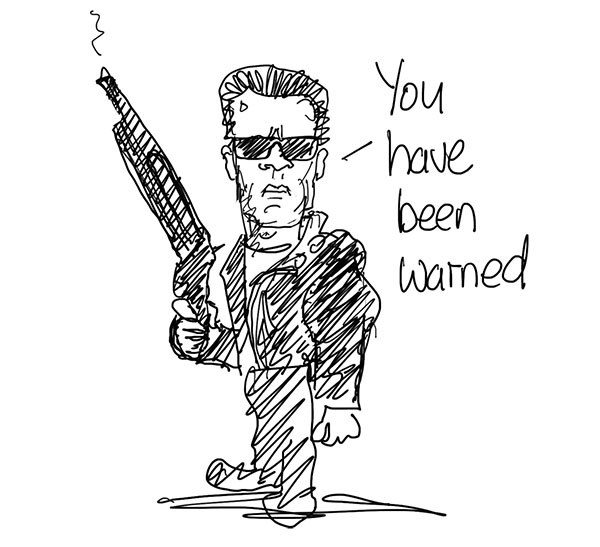 Sorry for the threatening ending.

Hope your weekend isn’t too dystopian, in fact, let’s go as far as utopian.