I had a traumatic experience while snowboarding a few years ago. 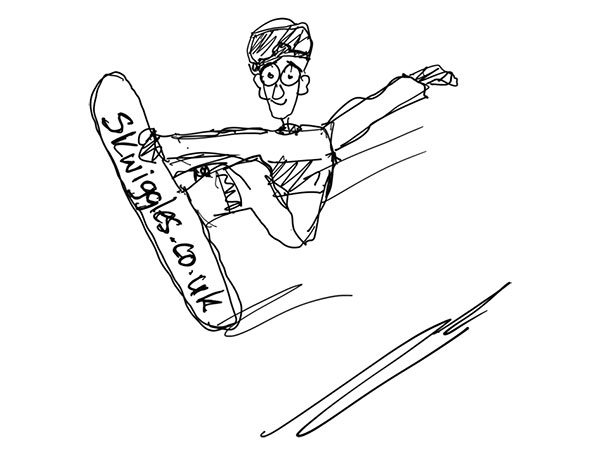 That sketch is exaggerating my skills a little, in fact a lottle – it’s a lie. I am a poor snowboarder, when I say poor I’m showing off, I’m crap, which was part of the problem.

The trauma happened when we went to Jackson Hole with another family. After a bit of tootling around on the green runs, my friends, who are experts, got bored of watching me do this… 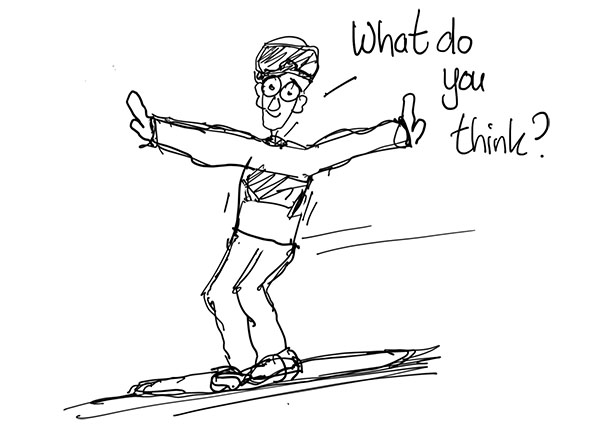 … and whizzed off to the top of the mountain for something more adrenaline-inducing. You will notice two lines on that sketch trying to denote speed, they weren’t there, more lies.

This email has started off a tissue of lies, but I assure you the rest is true (unfortunately).

Before my friends whizzed off up the mountain, I discovered the reason for my invite.
‘Since you’re completely and utterly garbage, could you just look after our children, Jaden (Age 9) and Megan (Age 6) on this green run for half an hour?’ 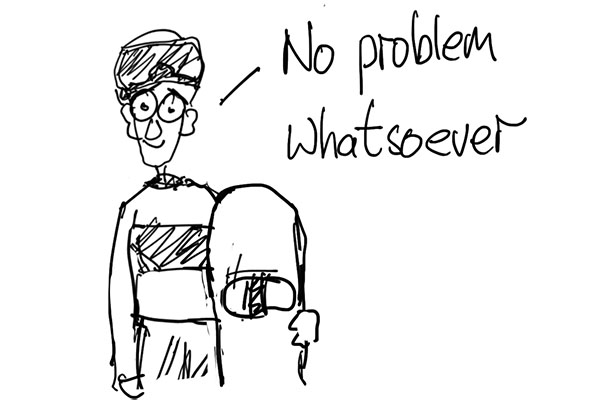 Jaden and Megan were skiers and a lot better than me.
‘Okay you two little scamps, let’s go.’
We jumped on the ski lift and headed up.

There are two distinct traumas involved in this story. When I tell you the ski lift didn’t have a safety bar, you might take a guess at the first.
Jaden: ‘Whoooohooo, what if I fall off.’ Sliding forward in her seat. ‘Whooohooo, this seat’s slippy, I might, woooo.’
‘Just sit back a little, Jaden, there’s a good girl.’
Whooo, look whhohohoh’
She fell off.

Unbelievably as she slipped off, somehow I managed to grab her arm. This is how I remember it. 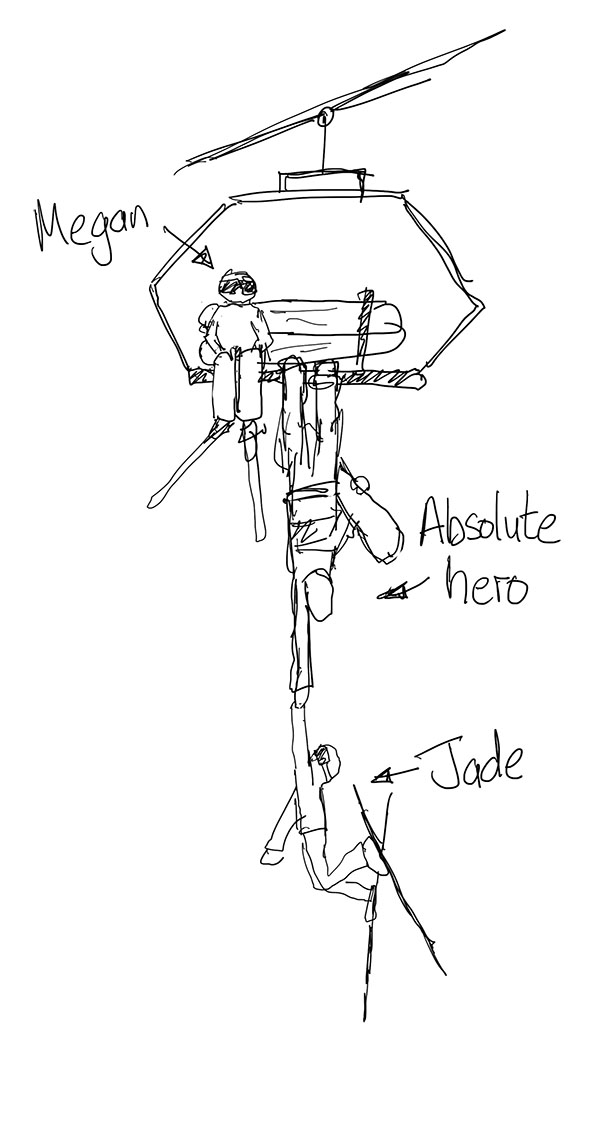 But, if you still think the truth is the way to go, it was probably more like this. 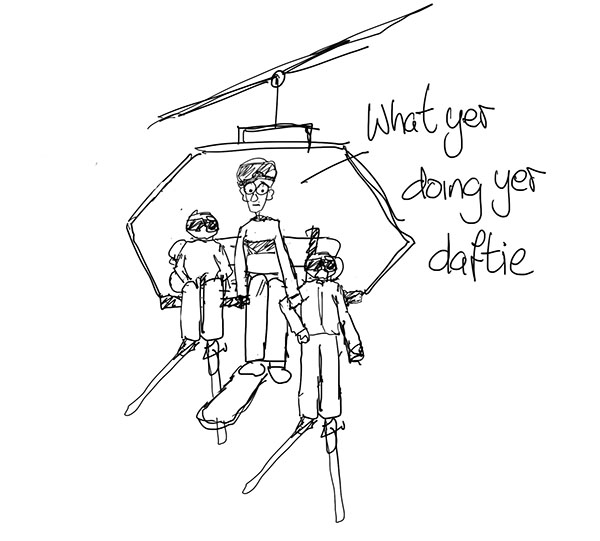 Either way, I’m claiming I saved her life. It doesn’t matter, because this is the lesser of the two traumas, just a trauma warm-up.

We got to the top and set off back down. They were skiing and I was ‘snowboarding’, note the inverted commas to indicate the word means ‘out of control on a plank.’ 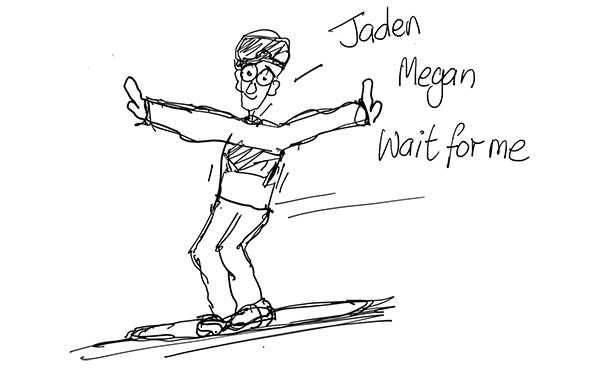 There were some trees to the right which more accomplished skiers could ski through, Megan disappeared into them. Jaden dipped into a section of sharpened swords interspersed with slamming guillotines… well she could’ve done for all I knew 3 miles behind.

Then I heard the blood-curdling scream from inside the trees, it went something like

I raced towards the screaming until it petered out and stopped. There’s only one thing worse than screaming and that’s not screaming, is a phrase I always live by.

I kept running and falling and having a mild heart attack, and then I saw a man standing on a bridge over a rocky, icy river.

I boarded down the slope, as if I was snowboarding to a funeral, which is a strange and disrespectful thing to do. 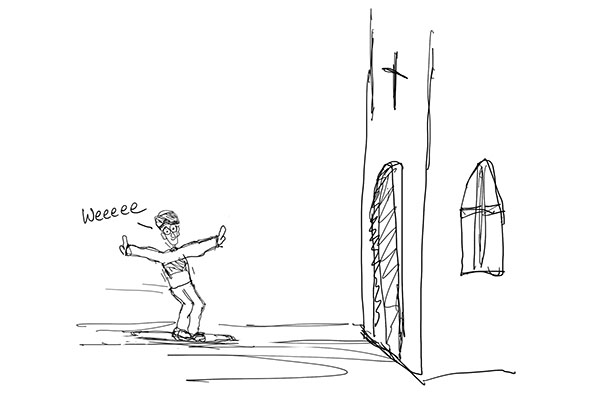 As I got further down, I saw Megan’s sister Jaden running up the slope
‘Megan’s broken her leg, it’s really bad, no, like, REALLY bad.’
I saw a crowd of people down by the ski lift. Some of them were looking back up the slope towards me. 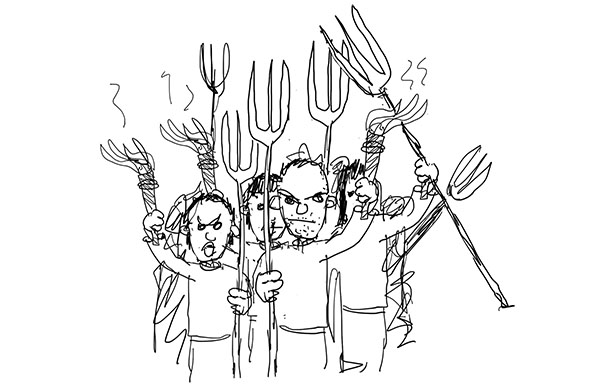 ‘Yeah, it’s reeaaly bad, super bad, poor Megan.’ Jaden was still being helpful and keeping me reminded of how bad it all was.

I was the responsible adult and I’d effectively broken a child’s leg, you don’t know how terrible that made me feel.

I was also living in America at the time, so I was expecting the FBI or CSI to bungy down from a chinook pretty soon, then Attorneys would bankrupt me and I’d be smacked in the face in a dingy grey office with two-way mirrors and end up in Guantanamo Bay. 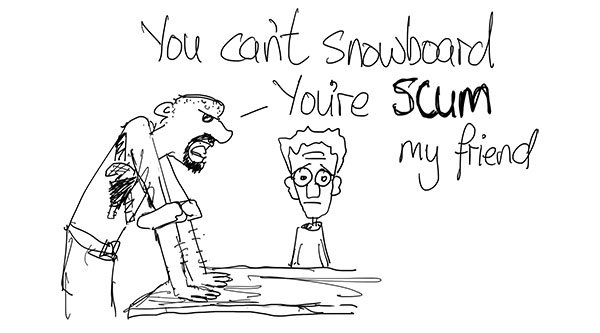 But enough about my self-pity, I hear you say, this was about poor Megan.

As I approached the flaming torches and pitchforks, I notice the crowd was dispersing a little, probably making way for an emergency helicopter to get close. Then I noticed a girl walking away from the crowd towards the toilets.

‘Just kidding she’s fine,’ said Jaden and skied off down the slope.

Megan had a bruise on her leg and arm, but once the medics had checked her over she was good to go.

I, on the other hand, required major surgery to have my hypothalamus removed so I would never experience those stress levels again. 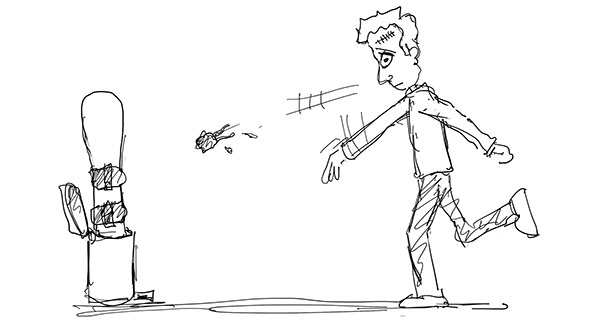 Just to let you know, after a quick trip to the toilet and a drink, Megan was back on the slopes. Her parents came back about an hour later, after a load of fun at the top.

‘Oh, Megan’s always doing that, the little terror,’ they said. ‘Forgot to say don’t let her go in the woods, she falls in the river every time. And Jaden, my oh my, she loves a good joke.’ 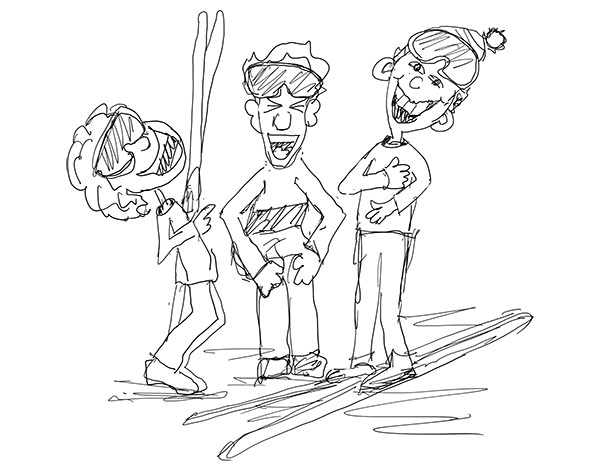 And then we stopped laughing. 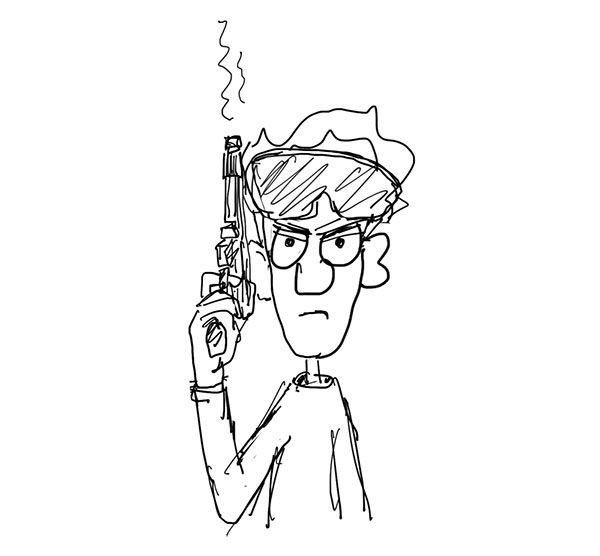