I know everything about everyone in our neighbourhood.

I’m not a curtain twitcher, I just get bored easily and exaggerate.

I take Norman out about 10 every night to get rid of the excess urine, Norman not me, although…

And on that short walk, it’s surprising how much you can learn.

Around the corner at No.26 is the home of Jon Snow, Lord Commander of the Night’s Watch, Ruler of The Wall and Protector of Humanity. I didn’t know he lived in a three-bedroomed semi either, but as the sun goes down and the solar-powered flaming torches light up the night sky like the entrance to his old gaff, Castle Black, I feel as though humankind is still in safe hands.

Thanks Jon, the north remembers.

Two doors down from Jon at No.22 is the UK headquarters of webuyanycar.com. Whoever lives here must drive two cars at once most days in order to keep the batteries from going flat.

I saw them the other day, it just didn’t look safe.

No.16 Wez (he has a personalised number plate) is having an affair. He’s only there on Fridays and he’s gone by the time I take Norman out in the morning. Wez doesn’t mess about with breakfast.

No.54 is living in a caravan on his drive. He’s in there every night. What kind of bust-up with his wife/girlfriend/boyfriend was that.

‘Right that’s it, you’ve gone too far.’
Slam
Pops head back in
‘Pass me the debit card I’m off down the caravan shop.’
Slam

If I’ve ever had a bad day I always head up to No.63 and the silly grass. No.63 goes to bed early and has artificial grass on their front lawn. Not ordinary artificial grass, this stuff is infused with a substance that causes labradors to tuck their bottoms under and wave their front legs in the air like they just don’t care.

This is the best I can do to simulate it.

I shouldn’t let him do it, but I can’t help it, it’s too much fun. Norman can’t work out what is happening to him and what this strange grass-like substance is beneath his feet. Sorry person at No.63, he doesn’t cause any damage and you’re making the world just a little bit happier.

I’ve changed the numbers on this by the way to protect the guilty (me).

On the way home I go passed the catholic church and the old monastery. The monastery is always in complete darkness except for an attic light that’s always on.

I’m obsessed with that light and who lives there, all alone in a massive old house. Well, I was until last night, when I happened to glance into one of the darkened windows and deep in the shadows, on what looked like an ancient staircase, I saw movement.

Norman was happily sniffing some female urine (dogs, I think, but you never know in our town), so I dragged him off as the figure’s head slowly turned to look at me.

I’m not going back that way again.

Before you go, what do you think’s happening here? 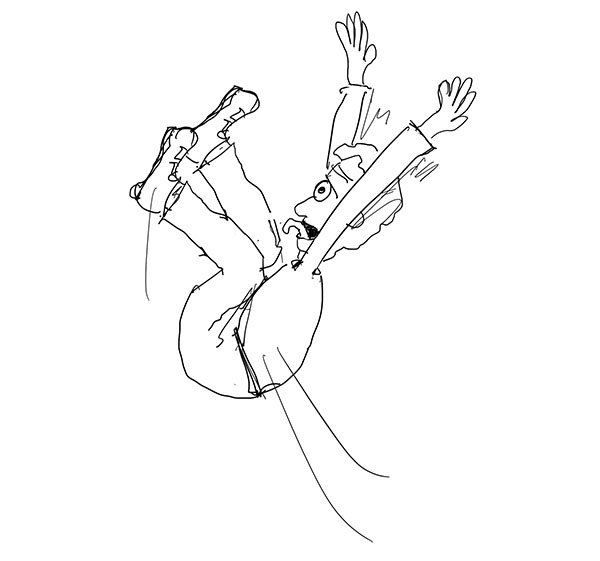 Yes, the silly grass works on humans too.